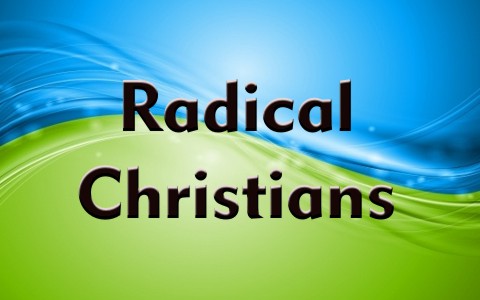 One of the definitions for the word “Radical” is, ▪characterized by independence of or departure from tradition; innovative or unorthodox:“the daring, avant-garde spirit of the music was too radical for the conservative audience”

Tradition is important, 2 Thessalonians 2:14-15, “Whereunto he called you by our gospel, to the obtaining of the glory of our Lord Jesus Christ. Therefore, brethren, stand fast, and hold the traditions which ye have been taught, whether by word, or our epistle.” Mans’ tradition is not, Mark 7:9, “And he said unto them, Full well ye reject the commandment of God, that ye may keep your own tradition.”

Jesus Christ came to not destroy the law but fulfill it according to Matthew 7:17. He did radically change the view that the so called spiritual leaders were teaching and requiring the everyday believer in God to follow. His words were powerful, John 7:45-46, “Then came the officers to the chief priests and Pharisees; and they said unto them, Why have ye not brought him? The officers answered, Never man spake like this man.” His actions showed His ability, John 3:1-2, “There was a man of the Pharisees, named Nicodemus, a ruler of the Jews: The same came to Jesus by night, and said unto him, Rabbi, we know that thou art a teacher come from God: for no man can do these miracles that thou doest, except God be with him.”

The words of Jesus had authority, He spoke against the religious bondage that mankind had been chained to, He was unorthodox, He healed on the Sabbath, He spoke of things that no man could know, heavenly things, and His words angered the religious.

The same thing is happening today. We have so many people who will declare that they are Christians but have been chained to the traditions of men. In the face of trials or the possibility of suffering for Christs sake they melt into denial that would make Peter’s denial look petty. They wear t-shirts, jewelry, have bumper stickers, and even tattoo’s declaring their love of God. They however have no root and will show no real signs of repentance, holiness, or LOVE in there lives.

Lets be unorthodox, independent from man’s traditions, daring to swim against the current, Radically Saved!

Been a Christian for 35+ years, a Pastor for 15+ years with the emphasis on teaching the word of God from sometimes a different point of view than was taught. Have authored 4 books to this point. Am Married and have 6 children, 13 grandchildren View all posts by jman9582015